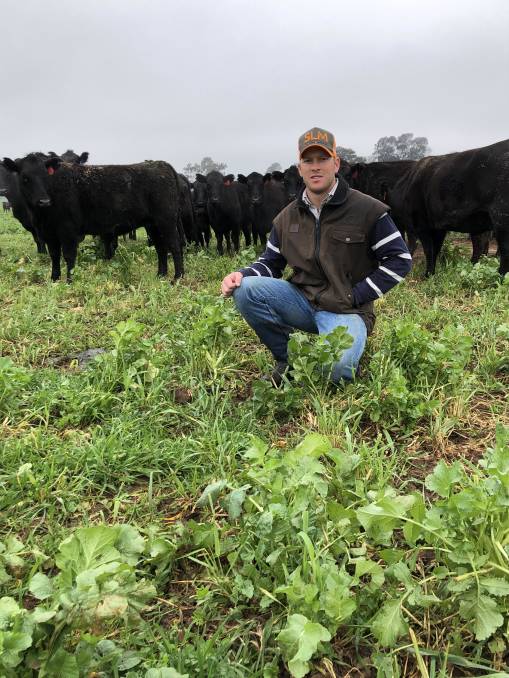 PERPLEXING TIMES: Brenton Henwood, of "Grove Meadow," Wagga is pictured with some Angus cows and calves on a grazing crop. Picture: Nikki Reynolds

HIGH buy in prices for restockers show that it's a dicey time to be in the cattle trading game.

But those close to the industry say there are other options to turn a dollar.

If recent bull sales in the north of the state are to be a guide, confidence is high. And this enthusiasm combined with grass fever in parts of NSW has people more willing to accept narrow margins.

However, for those wanting to purchase steers, put weight on, and sell them again reasonably quickly, the margins are slim. In addition the uncertainty of the COVID-19 pandemic and resulting shutdowns of some abattoirs due to the virus adds a new level of challenges.

In years gone by the Henwood family name was synonymous with large-scale single vendor sales of Angus where thousands of cattle would go under the hammer at Wagga Livestock Marketing Centre.

The family, led by the late patriarch Stan Henwood, is now carrying on the cattle-producing legacy in what can only be described as uncharted territory.

Brenton Henwood, "Grove Meadow," Wagga said he wished his grandfather was still alive so he could seek advice about the best course of action in the current climate.

Brenton explained that turning off steers, aged 12 to 14 months, and weighing 350 kilograms to 400 kilograms was a target.

In highlighting what works well Brenton said the quality of females was imperative. They had to withstand tough times and also thrive when rain arrived. He said incorporating good genetics was essential. STRETCH OUT THE TIME FRAME

Mark Lucas of Killimicat Station at Tumut in southern NSW says now is the time to look at the "long game."

It might be a case of reassessing the goals and considering purchasing females. Mr Lucas is an agronomist and also runs the studstock business Reiland Angus.

While parts of southern NSW might appear to be flush with feed at the moment, he cautioned that the region was coming out of a tough seasonal period.

Dry times were taking a toll in the Cooma-Monaro area with large numbers of cattle either sold or on agistment.

Mr Lucas said cost of production calculations were important. A quick turnover could be bench-marked at selling a calf weighing 230 kilograms. To make this happen, the producer would incur around $540 to $580 in fixed costs.

In a drought an additional 25 per cent needs to be added to this initial cost of production.

"The farmer isn't making any money until the calf returns at least $600," he said. But that was a calculation which Mr Lucas said was achievable.

If the current market was to be a guide, he said it was difficult to make money in short-term trades such as adding weight to steers.

He said the herd numbers and huge kills of breeding females had impacted the dynamics of the industry significantly.

"Like all (business) enterprises you have to look at a six-year time frame ... there are people who have made money but at the moment it's a bit skinny," he said.

In terms of investing in seedstock confidence was clearly evident. Mr Lucas said breeders were paying money to invest in bulls to improve the genetics of their herd.

Mr Lucas said old bulls could be traded out for as much as $3500 in the current market. This meant that paying $8000 for a sire certainly was within the budget.

But obviously a lot more than that has been paid for bulls when purchasers consider genetic potential and herd improvements.

RELIABLE MARKETS FOR THE LONGER TERM

Jim Simpson of "Bimbadeen", Gregadoo has bred Hereford cattle for 27 years and agrees with the long-game approach to making money in the beef industry. He said the slaughter figures for females were staggering.

"You can't just go into (cattle) in the short term and expect to make money out of it immediately ... it is at least two years before you look at getting any profit," he said.

Overall Mr Simpson said he was confident about the outlook of the cattle industry. In recent weeks prices had fallen by 5c/kg to 10c/kg at the Wagga cattle market.

However, on Monday prices increased again by up to 10c/kg with limited numbers and the prospect of rain in the region.

Mr Simpson said pockets of southern NSW looked good and there was evidence of pasture and crop growth. "We need to see the dams filling and creeks running though," he cautioned.

"We are looking down the barrel of a good season and we need more rain in August, September and into October," he said.

"We will send another consignment of Hereford steers to South Australia this week," he said.

The Hereford steers averaged just shy of 400kg. In the past Mr Simpson has sold heifers across Bass Strait to Tasmanian buyers.

Even though there's still a lot of "grass fever" at present with landholders looking to make the most of the autumn break, Forbes stock agent, Luke Whitty of Kevin Miller Whitty Lennon and Company, advises to buy with caution.

"There's a lot of movement in the cattle game currently and that all comes with a fair amount of risk," he said.

"If you are serious about buying breeding stock, then spend a little more money on quality for a longer term investment.

Mr Whitty said there were a lot of people buying cattle now with the intention of selling sometime in spring.

"But sometimes they do a lot of work for not a lot of profit.

"The market is very dear, but it normally cuts back a bit in spring.

"However, if you are looking to buy cattle now, buying little, lighter cattle to grow out to next year may give a bit of room to move, but I'd be looking to rebuilding my herd."

Dubbo region cattle producing buyers may well look at buying cows with calves or cows, either pregnant or not, as their best bet at the moment, according to PT Lord Dakin agent, Mark Garland.

"Some are even buying cows out of prime sales and taking the punt she's in calf," he said.

"But the value's in the long-term breeding I think you'll find."

He said that would pay dividends next year as cattle numbers would be less.

"We're noticing a decline in numbers this year, and I think next year there'll be an even bigger gap.

"At present, you'll notice at sales when the female section starts the crowd increases.

"A lot of blokes are taking the punt and buying heifers and joining them to calve down next year, then sell as cows with calves, or keep them for their own herd rebuilding."

Mr Garland said females were where people were channelling their money at the moment.

That is the big question for cattle producers in the seasonally-favoured districts across the south as they grapple with the excellent current pasture and grazing crop growth.

And if they are to buy cattle, what would be the best option? Short-term trading or longer term breeding stock.

Cootamundra-based livestock agent with Delta, Col Harris is urging caution among his clients who are contemplating the purchase of trading steers or heifers.

"It is a very expensive market at the moment with the lighter weight cattle selling for very dear values," Mr Harris said.

"And we don't know if the feedlot entry price for the spring will be as strong as it is at present."

He was also concerned about the narrow margin involved in buying light weight steers on the current market.

"When you are buying steers weighing 250kg for 430c/kg and you add in transport, husbandry and selling costs you only have to lose one and your profit is very slim."

Mr Harris was working on a feedlot entry weight of 400kg worth 410c/kg. "You have to work out how quickly your cattle will finish," he said.

"This season with wattle already in flower is telling me it is running a bit early and we will have to be careful of late frosts."

Mr Harris further pointed out the cost of money wasn't part of his margin equation on current prices.

"You've got to have the money up front, you can't afford to be borrowing to buy stock," he said.

Agistment is a good option for those with feed, while Mr Harris suggested making hay or silage from the surplus growth should be considered, while some have sown more cereal crop.

Taking on agistment has been the best option for many of Jake Smith's clients across the eastern Riverina and southwest slopes.

Mr Smith, Elders Gundagai livestock agent said there is a lot of stock from the Monaro grazing the early crops which have done very well due to the kind season.

"Another option has been to split between buying in and agisting to spread the risk."

Mr Smith said producers are hoping to turn off the steers at 450kg for 410c/kg into the feedlots but he is concerned about the feeder rate in the spring when there will be a lot of cattle coming through the pipeline.

He is also hesitant about buying at the moment, considering current prices "very dear".

"After selling their herds down due to drought and also taking advantage of the great prices to get rid of their poorer performers, many producers are slowly rebuilding," he said.

"They made the right decision to sell and are now in a position to buy better bulls as they rebuild their herd."

The entire industry recognises a lot of young females have been sold into feedlots or bought by processors which should leave options for the purchase of weaner heifers for future joining wide open.

But Mr Smith is more cautious and suggests buying heifers is not a preferred option.

"It is a big investment but you are in for the long haul," he said.

"At the moment anyone considering buying heifers is competing against feedlots or grass finishers."